Investing in the JSE All Share Index has become a swear word as the herd flee our shores in favour of investing offshore and it is hard to make a case for investing locally given all the bad news and negativity.

But is the herd getting it wrong again? See article below, which I wrote in Aug 2012 warning SA investors not to invest all their money in the JSE ALSI, but to diversify offshore. Of course, local was lekker and no-one listened!

Recency Bias refers to an investor’s behaviour in taking investment action based on the most recent data or trend rather than putting current situations into historical perspective. The investment warning, “past performance should not be taken as an indication of future performance”, is based on this well documented investor behavioural error.  This is often easy said than done.

The graph below illustrates the relative performance of the major stock markets to that of the MSCI World Index expressed in local currency. 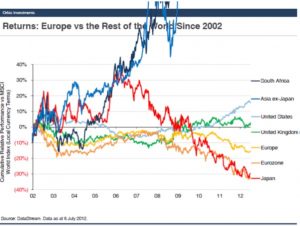 As you can see South Africa and Asia ex-Japan’s relative performance since 2002 is literally off the charts versus the major developed markets.

Investors Recency Bias could explain why investor’s continue to drive our stock market higher in the face of demanding valuations relative to global peer companies.

Investors will do well to remember that markets are like elastic bands, which stretch until a point when they stretch no more. Fridays “Lonmin” motivated sell-off by foreigners and the subsequent fall of the Rand should be a reminder to local investors that our market is also not “bullet proof”.