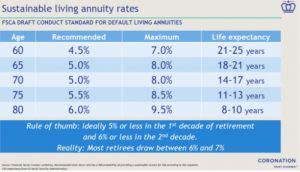 Living annuities get a bad rap from the regulator owing to the flexibility of the product, which allows the retiree to decide on the level of income drawn of between 2.5% – 17.5%.   The regulators concern is understandable particularly where you have a less sophisticated investor who may not understand the implication of drawing a higher income, which ultimately sees the retiree run out of money.  However, many retirees with a clear understanding of the implication of drawing too much have no option, but to draw an unsustainable amount simply to cover their basic living costs.

Rules of thumb are dangerous, but a good rule is not to exceed 5% drawdown rate in your 1st decade of retirement increasing to a max of 6% in the 2nd decade.  Of course, an appropriate drawdown rate is dependent on the underlying investment strategy, which is linked to the investors personal risk / return budget and life expectancy.

Retirement drawdown rules are not to be used as a “one shoe fit all” tool and should be viewed with caution.  I strongly recommend anyone considering a living annuity in retirement seek professional help preferably from a Certified Financial Planner CFP®.   And remember retirement planning should not start in the year of retirement, but in the 1st year you start working!