Our love for stories and the ability to share stories widely has been mooted as the key determinant of our success as humankind, but also our potential downfall as investors.  We cannot resist a good story, which talks to our emotions overriding our rational thought process and even more powerful are the scary stories.   Both end up costing investors dearly.

Warren Buffett is quoted as saying the best investors are not those with the highest IQ, but rather those with the highest EQ or emotional intelligence.  Those investors with the ability to distinguish fact from fiction within the story.  The rest of us are doomed to follow the herd using our intuitive “lizard” fight, flight or freeze brain when taking decisions.

Stories are much better with illustrations.  The following graph tells the story of selling out of SA at any cost to take your money offshore, which is premised on a failing SA brought about by the fraught political situation and epitomised by the corruption over the last decade and the poor returns from the JSE over the last 5 years. 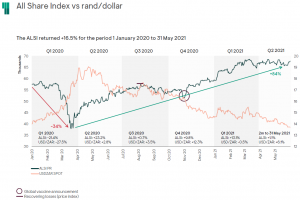 The chorus reached deafening levels early March last year at the peak of the global Covid crisis with investors selling out of the ALSI in droves to take their money offshore.  The scare story sounded so convincing with immediate action required, no time for rational thought, do or die!  Sadly, those investors who followed the herd have lost out on the ALSI’s 84% bounce and a 29% recovery in the rand vs. dollar leading to a total rand loss of over 50% from Jan 2020 – May 2021.

No prizes for guessing, which global equity market delivered the best returns in dollars over the last year.  Yes, you right the ALSI…… Even the 3, 5 yr. numbers do not look nearly as bad as the story may have led you to believe and the moral of the story, do not let your emotions overrule your rational thought process.

Apparently, a person should frown to engage one’s rational brain.  If that does not work take a cold shower and call your adviser!